The next subscribers to the Pioneer Monument are in contrast to each other.  Of one, Richard T. Root, little is known.  The second, Dennis Sheedy is under represented in Denver.  There is little mention of Sheedy because he does not have a street or city block named after him.  His mansion at 11th and Grant is preserved, and brings him to the attention of Denver Historians.

Richard T. Root was associated with the Amethyst Electric Power and Water Company in Crede Colorado.  He was also involved in mining, having an office at the First National Bank Building.  A fellow historian is working on his story and hopes to find more information about him.

Dennis Sheedy was born in Ireland, 1846.  Born a year after the Irish Potato Famine started, his flight to America was a lucky move.  First settling in Massachusetts, then Iowa, the early years were tough.  Dennis’s father and sister died the same year, 1858.  The twelve year old worked in a general store to support his mother and surviving sister.

In 1863 Dennis moved to Denver and was able to continue the same line of work, as an employee of a general store.  At seventeen he already had a base in retail.  Five years later with saved money he moved to Montana Territory and set up his own grocery business.  Using $150 he earned and saved, he invested in mining claims.  By buying and selling mining claims he accumulated $7000.00 in greenbacks in seven months.  Pursuing knowledge, he went to Chicago to study commercial law, finishing a one year study in six months.  Soon, he began selling cattle in Wyoming, Texas, California, Kanas, Arizona, Nevada, and Mexico.  At one time he owned 32,000 head of cattle.  During these times Sheedy was chased by waring native tribes and traveled as far as 600 miles on horseback.  He didn’t pass up commercial opportunity.  When in Utah, he observed Mormon wives used outdated, large fire places for needed household chores.  By buying cast cook stoves in Chicago for $24 each, he shipped them west and sold them for $125.00 to $175.00, improving the lot of Mormon women and his own fortunes.

In 1882, and thirty-six years old, he married Katherine V. Ryan, daughter of a prominent Leavenworth businessman.  They returned to Denver.  Dennis by now was worth a fortune.  His prominence as a Denver businessman took shape after his cattle business.  Brought back to Denver by the death of his friend, A.B. Daniels.  As executor of the estate, his entrepreneurial instincts increased the size of the departed’s estate by 100% before it was handed to Daniels’ son.

On his return to Denver, through stock ownership, Dennis Sheedy was a Director at Colorado National Bank, by 1886 his position was raised to Vice President.  His position was to protect the banks interests.  In 1889 he called in the chips on the struggling Holden Smelter.  He renamed it the Globe Smelting and Refinery Company.  Business under his leadership flourished.  Sheedy himself held 18 patents concerning the refining process.

The refinery business wasn’t always easy.  On 7-1-1903 the Mill & Smeltermens Union went on strike at the smelters.  An eight hour workday bill had been passed but not enforced.  The strikers tried to decrease their hours and the strike caused 775 men to be without work.  One smelter, the ASARCO, was operating with obsolete techniques and didn’t reopen.  Another smelter, the Argo, struggled to recover from a fire.  The others struggled on but there was less ore to process and the ore that was coming into the smelters was of poorer grade, again lowering profits. 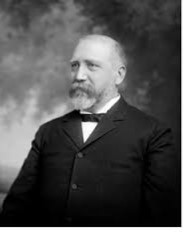 Sheedy repeated his financial magic again with the McNamara Dry Goods Company.  The 1893 recession hit McNamara hard in the middle of an expansion phase.  Sheedy saw an opportunity or was it a challenge?  At first the reorganized mercantile company was called Sheedy & Kountze.  Then it was renamed Denver Dry Goods Company and grew to one of the largest retail firms west of the Mississippi.  Sheedy called in Denver’s prince of design, Frank Edbrooke, and built the large store on 15th and California that was expanded three times, in 1898, 1906 and again in 1924.

The mansion at 1115 Grant was started in 1890 and completed two years later.  It is an example of late Victorian Era eccentricities by combining elements of Queen Anne and Richardson Romanesque.  The Architects were from Kansas, Erasmus Theodore Carr and William Pratt Feth.  It is their only known Colorado commission.  The estate at east 11th and Grant Street was originally 10 lots (250’ x 125’).  It included the carriage house.  Initially the budget was $40,000, then $45,000, and finally it hit $80,000.  The budget included fifteen fire places and Colorado sandstone from Lyons (foundation) and Manitou (exterior trim and columns).  Interior woods used by master woodworker Joseph J. Queree include birds-eye-maple, sycamore, cherry, mahogany, quarter-sawn oak and curly birch.

Where there is profit, there is philanthropy.  Dennis Sheedy, along with other prominent Denverites at the time, supported the idea of a Catholic Cathedral in Denver.  The ground breaking was 1902.  Sheedy was involved in the 1907 planning of the building.  It was finished in 1911.  Saint Joseph Hospital was another institution supported by Sheedy’s bounty.

Dennis Sheedy’s wealth did not insulate him from personal tragedy.  Katherine and Dennis had six children.  Two lived past infancy, Marie Josephine and Florence Elizabeth.  Katherine, Sheedy’s wife, died June 22, 1895.  Three years later Dennis remarried.  His wife was Mary Teresa Burke of Chicago.  She was a niece of Bishop Maurice F. Burke of St. Joseph, Missouri.  Two sons were born to the couple but both died in childhood.

The Sheedy Mansion at 11th and Grant

The Sheedy mansion has had a limited number of owners.  In 1928 Helen Bonfils purchased the home.  When the mansion was passed from Sheedy to the Bonfils its purpose was for a music school.  Helen Bonfils motivation was not profit but art for art’s sake.  This unselfish act held the mansion in suspension while the neighborhood changed around it.  When the mansion was readapted, it was for offices.  It missed the boarding house phase of most Capitol Hill Mansions.  The interior stayed intact.  The National Register of Historic Places application was applied for in 2003, making it a recent addition to preservation protection.

Former Historic Denver Walking Tour Docent, Larry Wiberg can contest to Dennis Sheedy’s compassion.  His grandfather was brought into the Grant Street mansion as a care taker when the grandfather’s heath was failing.  Dennis Sheedy’s reputation as a business man was portrayed as hard, calling in loans for the Colorado National Bank.  Tempered by hard times Sheedy was certainly the enforcer, but as such, he was the protector of assets.  The smelter employed numerous immigrants from Eastern Europe.  The Denver Dry Goods employed 1200 at one time. 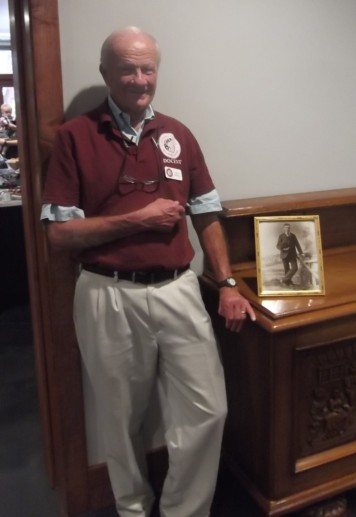 Dennis Sheedy saw his share of loved ones pass before he died in 1923.  He had numerous children pass before his own heavenly trip.  After his death, his second wife, Mary moved to 777 Logan.  Then, later to the Brown Palace in 1926.  She died in 1958.  The daughters, Mrs. Robert Livingston and Mrs. I Townsend Burden lived in New York City.  Dennis Sheedy’s sister, Mrs. O’Donnell, lived in Omaha. Dennis Sheedy’s funeral was Saturday morning, October 16, 1923.  W.P. Horan and son were in charge of arrangements.  Retired Reverend Francis Gilfallon, Bishop of St. Joseph, a friend of the family, sang the Pontifical Requiem Mass in the Cathedral.  Bishop Tihen gave the blessing.  Sheedy is buried at Mt. Olivet.

Dennis Sheedy had no guarantees in his life.  It started off tough, and at times, got tougher.  First he lost his father and sister.  Later, his Midas touch could not keep him from hardship, as numerous children passed, as well as his first wife, Katherine.  Dennis Sheedy lived a privileged and comfortable life, his best long term investment might have been his generosity toward the Immaculate Conception Cathedral.

& two other children. (no names found)

(This blog is beyond excellent if you haven’t seen it)

CATTLE TRADE OF THE WEST AND SOUTHWEST, BY JOSEPH G. McCOY

History of the Immaculate Conception Cathedral.

This entry was posted on October 14, 2018 by denverhistoryblog in Larimer Street.