The Picture below was taken in 1860 by William Gunnison Chamberlain whose photographic studio was an Larimer Street.  This is a picture of Blake Street.  Does the term “Storage & Commission” mean something?  “Storage” is easy to understand, but what does it mean to advertise “Commission”. 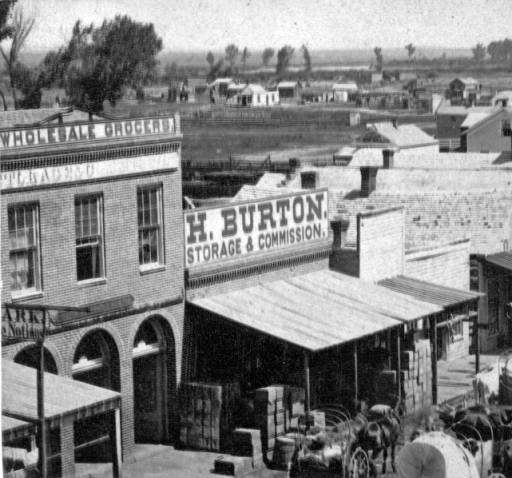 Commission was a way in which business was conducted, especially before 1860.  Denver, being just settled at the time, was slightly old fashioned in their business dealings.  They were still  using the commission system when the East was trying to  figure out how they were going to deal with increased production due to the American Civil War.

Banks were a different animal at the time.  They did not take risks.  We know banks didn’t loan money to a certain type of   people (other than white male land owners).  They wanted some form of collateral before lending money.  The country was run on agriculture.  Ventures such as railroads were considered risky and non-traditional.  It was hard to get money for non-agricultural businesses, the risk was perceived as too high for the conservative banking establishment.

So money had to found elsewhere.  This is where the commission merchant stepped in.  From the Dictionary of American History:  “Commission merchants advanced money to planters and manufacturers.  In return, the products of the farm and factory were consigned to them for sale.  The planter and manufacturer were thus free from the expense and trouble of selling and could devote their time, capital and energy to the production of goods.”

I was doing research on the word COMMISSION the last few weeks because it stood out at me when I was looking at pictures of Larimer Street and the surrounding area.  The word popped back at me again Saturday when I found myself in the basement of Dave & Linda Cook’s art gallery.  The Dave Cook Gallery is across from the Rockmount Western Wear building.  When I give a LODO tour, which I was doing Saturday, I have my tour guests back up to the gallery’s large plate glass window to view the Rockmount building across the street.  A few months ago I was visiting businesses on Wazee during Doors Open Denver.  I ran into Linda Cook at one gallery, we spoke briefly, and she invited me to visit her at her gallery.

Linda explained that their gallery dealt in large part with historical paintings.  Yesterday she told me only two of her commissioned artists were alive, one being 100 years old, and the other 101 years old.  I have limited art history but know enough to get myself in trouble.  If I didn’t recognize an artist, I could at least recognize the subject, the American West.  I was intrigued.

I apologized to Linda many times that I blocked her window with my tour groups, she laughed.  We spoke about the tours and I told her my writing these days is concentrating on Larimer Street.  Her eyes sparkled and she excitedly told me she had a picture in basement storage of “F” Street.  Fifteen Street was originally called “F” street.  She took me downstairs,  through a security door, past a person working on photographing art for the business, and lead me into a well organized basement of categorized art.  I must admit, Linda did have a bit of a time trying to find the picture she was looking for, but was able to pull up a photo of it on her computer.  It showed what F street looked like in 1860.  We continued to talk about history and our jobs, which function around commission pay, hers in art, mine in cars.  This definition of commission is different than what I wrote about above, but we laughed that we both take risks,  normally in the form of long working hours and working too many days a week.  I thought how strange the word commission kept popping up in conversations about my employment, writing and art.

The piece of art that Linda showed me was of the type I have been studying trying to make sense of old time Denver, especially Larimer Street.  I pointed to the work, painted on a sign was the same term as on the photograph above, “Storage & Commission”.  I explained that I have been doing research on this term for the last couple of weeks and was trying to get to the bottom of it.  We then dived into more history about Denver.  She asked if Market street was named for markets.  As Reed Weimer (Denver artist, and musician) would say, that took us down the History Hole, I explained how market street got it’s name.  That is for another day and a lot more time.

Linda and I continued our conversation about work, commissions, customers and all things retail.  I was explaining that It would be nice to be able to take pictures of the art and post it in these Emails.  It is a commissioned piece and she wasn’t sure if it was OK, I agreed.  I didn’t know if it was in the public sector, and I was hesitant to use it with out permission.  My idea was to see if there was another source for the original lithograph she had of F street.  I figured it would be difficult to write about if I didn’t have something to show my readers.

It took just a few minutes when I returned home to luckily come upon the picture Linda showed me.  It is in the book:   Miracle on Cherry Creek, by Bill Brenneman.  It is below: 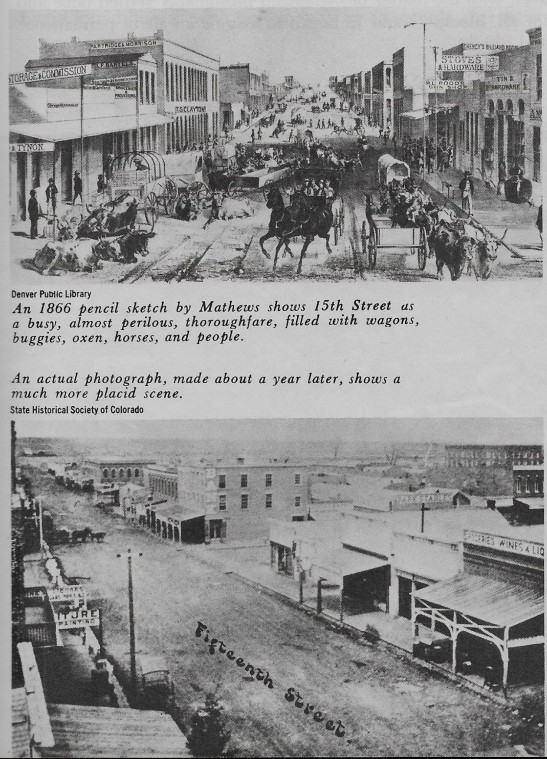 In the sketch, the sign on the upper right says: Storage & Commission.  This was what sparked a long conversation about Denver history with Linda.

The book: History of Denver by J.E. Wharton with a full and complete Business Directory by D.O. Wilhelm, Denver, 1866, lists 34 Grocery & Commission Merchants in Denver.  I recognized three names from the list: Sopris, Daniels and Londoner.  One facet of the wild west is that you took risks, those who did, succeeded and were compensated.  Those who lost their money were considered foolish gamblers.

Another detail I pointed out to Linda, and I wanted to bring it up the last couple of weeks, were the animals in the pictures.  The artist, Mathews, took the liberty to fatten up the cows.  In the full DPL picture shown at the beginning of the article (DPL X-22487) it shows cattle and oxen.  They have just crossed the plains.  You can count their ribs.  In Mathews picture, the oxen and cows look very plump, call it artistic latitude.

Linda and I continued to talk about art when I spotted a picture that caught my interest.  As I approached the picture, my attention went right to the artist.  On the description tag, the name jumped out at me, Charles S. Stobie.

I am getting ahead of myself on the Larimer Tour, but timing is everything.  Right now, you can visit the Dave Cook Gallery and check out a Stobie painting.  When we tour the building where the Market is on Larimer Square we talk about Stobie.  He lived in the Gallup-Stanbury building.  So, if you are a Larimer guide, stop in at the gallery so you can familiarize yourself with the “famous” artist we talk about on the tour.  As we learn more about Larimer Street I will pass on more information about Stobie, but I am getting ahead of myself.  I would encourage you to stop in and see the Stobie, just because the opportunity is there.  And meet Linda, Dave and her staff.

This is probably repeated information but it is a constant  battle for me when doing research.  The streets in Denver changed names.  It makes it easier to do research when I know the street names.   The numerical streets we know today, 16th Street and such, were originally name for letters of the alphabet.

The addresses on Larimer ran from 331 which was the Miller Building, now Ted’s Montana Grill, to 361 which now Ocean Prime.  The new addresses are 1401 (Ted’s) to 1461-1463 (Ocean Prime).   The addresses starting with “3’s” ran up to the 1500 and 1600 hundred blocks of Larimer, making things confusing.  The Southeast side of Larimer has the even number addresses.

It is easier to call the streets the north side or south side.  The odd number side is actually the Northwest side, the even number side is the Southeast.  Of course it makes it extra      difficult, but it also makes it Denver.

On the South East side of the street there were addresses that had “1/2” as part of the address, such as 338 1/2, which was a candy shop about were Bistro Vendome now sits.  The address with the “1/2” sat on the alley, behind the main buildings on Larimer Street.

As always, additions, comments or corrections are welcomed.

A special thanks to Linda Cook for the art & history lessons!