The Plattsmouth-Nebraska wagon train company arrived in the area to be called Montana City on October 24, 1858.  It consisted of fifteen wagons that held fifty-six men and one woman.  Count Murat and his wife Katrina arrived with intention to mine the miners, at that time it was all placer gold.  The residents of Montana City later moved their town downriver to the more promising location of Auraria.  There, the Count opened the El Dorado Hotel.  Not much more than a log cabin, he and his wife did what they could to make it work.

Horace Greeley arrived in Denver City on June 6, 1859. Greeley, of “Go West Young Man” fame, spent twelve days in the area, visiting the diggings at Gregory Gulch near the future Central City then returning to Denver.  Murat charged Greeley a dollar for a haircut, his wife charged three dollars to do his laundry.

General Larimer suggested Murat move across Cherry Creek to 344 Larimer, now 1426 Larimer.  Sometime that summer Murat and his wife moved to the present site of the Kettle building continuing his barber and dentist trade, hoping his luck would support his continual gambling.  The count claimed royal linage from the famous Murat of Bonaparte who said when facing a firing squad: “aim for the heart, save the face.”  Henri Murat’s claimed royal linage gave his wife, the first white women in the region, the title of countess, also a first in the region.

George E. Kettle took over the location where Murat had his barber shop.  Kettle was a butcher by trade.  Records show he arrived in Denver April 6, 1859.  After trying his luck in Summit County where he opened the first butcher shop, he returned to Denver.  Relying on the support of his neighbor’s masonry he built one of a number of butcher shops.  This was his first at 1426 Larimer in 1873.  He partnered with Taylor F. Maulding running a shop on F street in 1880.  Next year, he and Milo B. Smith were at 490 Arapahoe in the meat business.  In 1884 he was located at 451 Broadway.  He moved to 625 Grant Street in 1886.

Kettle’s later occupations were listed as a cattle dealer, stock dealer, mining, vegetable dealer, fruit dealer and real estate.  He has an addition to Denver real estate named after himself, Kettle’s Addition.  It runs east of Broadway to Alamo Placita Park.  To get there you could take the Denver Street car, George Kettle road the first one on the south bound route along Broadway in 1874.  George Kettle also ran for city Alderman, not making the cut.  George survived until 1887, his wife until 1906, they are listed in Henrietta E. Bromwell’s history of Colorado Pioneers.  George is buried at Riverside Cemetery.

Tom Noel’s Larimer Street book lists other uses of the Kettle building.  It includes housing the Rocky Mountain Curiosity Shop, the Denver Daily Hotel Reporter Newspaper, an ostrich feather cleaning shop.  Later on, when Larimer Square was incorporated, it was home to a chocolate store, Le Chocolate.  In the late 1980’s the arcade was bored through the building to provide a path to the rear businesses, hence the New Kettle Arcade.

I visited the Philadelphia Print shop in Cherry Creek this weekend.  I asked Chuck, second in command, if he had a copy of the print I wrote about two weeks ago, F STREET, by Mathews.  He was more than familiar with the print and asked if I knew about the Mathew print titled LARAMIE STREET.  It appears the printers out East never heard of Larimer Street and thought that Mathews misspelled Laramie (Wyoming) and changed it without asking.  So the print is mislabeled.

Denver’s Larimer Street in 1866, one from a series of 32 sketches called: PENCIL SKETCHES OF COLORADO by Alfred Edward Mathers

Chris Musselman and Diane Travis treated our group of docents to a tour of 16th Street to get us interested in adding another tour to our repertoire.  We had a great time, learned a lot and got some fresh air.  Chris and Diane really did their homework and presented a great tour.  The tour integrates new and old architecture.  Great visual aids really help envision what Denver was like pre-DURA (Denver Urban Renewal Authority). 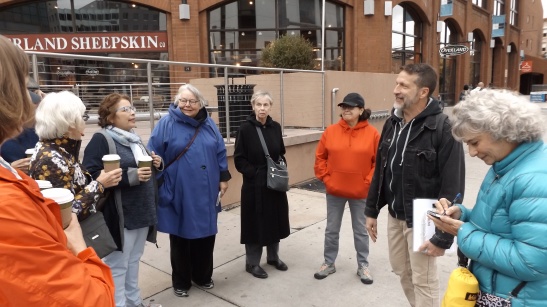