The twelfth name on the Colonnade of Civic Benefactors is Helen and Arthur Johnson.  Arthur was an oil man.  Helen’s interest was hippopotamus sized philanthropy.

Arthur E. Johnson was born in Colorado Springs, September 4, 1892.  After driving horse teams in Wyoming, Johnson found work at Franco Petroleum Company.  Franco was later known as Midwest Refining Company.  It was with Midwest Oil that he was appointed as purchasing agent.  Eventually he became the assistant to the vice-president of Midwest, T.A.Dines.  Dines employed Miss Helen Kenney (1895-1978).  Arthur Johnson and Helen Kenney wed in 1918.  Arthur then joined the war effort and became a First Lieutenant in First Battalion, 355 Infantry.

After the war Johnson returned to the oil business.  Dines, his old boss, was now promoted to president.  Johnson remained his assistant.  In 1921 Midwest sold out to Standard Oil Company.  What was Midwest, organized into the Argo Oil Company to produce oil.  In a reversal, in 1932 Johnson bought back from Standard Oil the controlling interest of Argo Oil.  Argo then expanded into Kansas and New Mexico.  By 1948 there was enough money to start the Helen K. & Arthur E. Johnson Foundation.

The Foundation is the Johnson’s legacy.  The construction of the feline building at the Denver Zoo was financed by a $475,000 gift in 1956 from the Johnsons.  The Johnsons also were instrumental in purchasing Bertie.  Bertie was a two year old hippopotamus at New York’s Central Park Zoo.  In December 1958 the Johnsons made an auction bid for the animal, won and paid for its transportation to Denver.  Bertie survived until 2015, having the distinction of being the oldest hippopotamus in the United States.  The zoo still houses Bertie’s son, Mahali.

Argo Oil Corporation was sold to Atlantic Refining Company in 1961.  In 1962 the Johnsons moved from a Burham Hoyt designed house at 515 Race in the Country Club neighborhood to the Polo Grounds.  The house at 515 was later donated by Bill Daniels to DU.  The 1960’s began their continual giving from the Foundation.

In 1965 the Denver Museum received money for their new South-West wing.  The Botswana African Hall was donation by the Foundation.  Education gained from the foundation when the Foundation donated to the Sertoma Club, insuring 8th graders got a copy of the Declaration of Independence to carry with them.  Kent school also was graced with a donation.

The Boy Scout Chapel at Peaceful Valley Scout Ranch was donated by Arthur Johnson in 1971.  In 1972 he turned his money toward politics, donating $30,000 to Nixon’s re-election campaign.  Arthur passed away in 1977, his wife, Helen the next year.  His obituary also lists his associations:  Member of Executive Committee of United Bank, Retired Boardman of Argo Oil, Board of Directors of the Community Chest, Trustee of the Denver Museum of Natural History and Director of the Air Force Academy Foundation.  He also received humanitarian awards from Colorado College, Boys Club of Denver, Volunteers of America, Colorado Symphony and the Mile Hi Sertoma club. 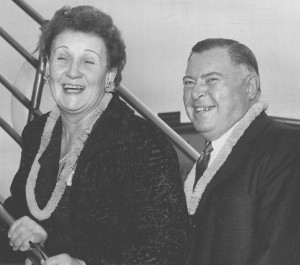 Barbara Johnson Hartley, the daughter of Helen and Arthur was the founding trustee of the Foundation.  Under her leadership the list of recipients from the foundation is a who’s who of Colorado institutions.  Since Arthur attended Colorado College, briefly, they became one of the recipients of his gifts.  In 1995 Arthur was entered into the Colorado Businessman’s Hall of Fame.  The foundation added other educational institutions to their giving list including the Stanley British School.

Barbara Johnson Harley continued to run the foundation until it was taken up by her grand daughter.  Miss Lynn Hullyard was the grand daughter of Helen K. Johnson.  She was wed in 1971 to Thomas Baird Campion.  She took over leadership of the Foundation before her grand mother’s death in 2009.

The gifts from the Foundation then enriched the community even more.  In 2015 the University of Colorado Depression Center was renamed the Helen & Arthur E. Johnson Depression Center in honor of a $10 million donation from the Foundation.  It addresses depression, bipolar disorders and anxiety disorders.  Another gift was given to the Beth-El College of Nursing and Health Sciences.  The next year $100,000 was given to the Kempe Center that is committed to eradication child abuse and neglect.  Saint Joseph Hospital received $2 million in 2015 for a patient care center.

Not ignoring our four footed friends, the Foundation donated another $10 million to CSU for an equine hospital in 2015.   Other benefactors were the Food Bank of the Rockies and Craig Hospital.

Yet to be seen, scheduled to be completed in 2020, is the new state of the art animal hospital at the Denver Zoo, it will be named the Helen and Arthur E. Johnson Animal Hospital.  And still in construction, is the new North Building to the Denver Art Museum that was given $10 million by the Foundation.  This was the last major gift of the Foundation before closing its doors in 2016.  The Johnsons left a lasting impact on Denver.

This entry was posted on April 6, 2020 by denverhistoryblog in Larimer Street.