The second name on the Colonnade of Civic Benefactors is William C. Bradbury (1849-1925).  Bradbury ran away from home, at 14, to become a Drummer Boy in the Civil War.  It took two weeks before his father found him and brought him back home to Taunton, Massachusetts.  The war ended before Bradbury could enlist again.  In 1871 he came to Colorado Territory to make payment on land his father owned in Evans.  He stayed.

His first success was owning a mercantile business in Colorado Springs.  The business sold paints, oils, lass, artist materials and wall paper.  He also had a “force of men” for painting and paper hanging.  He did this until 1878 when his health was starting to fail and on advise of his doctor he got an “outdoor” job.  He moved into the freight and passenger business.  His freight business traveled between Colorado Springs and Leadville.  He had 5 to 8 mule teams, that travelled up Ute Pass via South Park and Buena Vista.  He also had a 6 horse stage line and mail route from Colorado Springs to Leadville via Ute Pass and Western Pass.  When the railroad was finally built to Leadville the freighters were out of business.

Bradley started to contract railroad building and irrigation projects.  He moved to Tres Pledras, New Mexico and worked under R.E. Sloan, Territorial Governor of Arizona.  There he ran two sawmills that made railroad ties.  He supplied the railroad between Chama and Durango.  He also supplied the Denver & Rio Grande between Antonita & the New Mexico state line.  He also work north, supplying the Burlington Railroad in Denver for the line near Akron.

Railroad work lead to canal building.  In the southern part of Colorado he was able to buy 35,000 acres of land from the state, including the water rights.  Bradley owned 7,000 lambs.  The herd eventually increased to 17,000.  Parts of the land was sold off.  Some he kept, planting 700 acres of apples and other fruit trees.

Bradley was an outdoorsman.  He hunted buffalo until they started to peter out in 1876.  He was an angler, always ready to throw hook in water.  He even did ocean fishing.  His love the outdoors is why he was added to the Colonnade.  He had a passion for birds.  He collected 4500 bird eggs and nests starting from an early age.  These treasures represented 900 species of birds.

In 1908 he was located in Denver.  His company, W.C. Bradbury Railroad Contractors was located at 1515 Larimer in the Railroad Building, suites 505 –506.  Colorado’s Natural History Museum was begun from Edwin Carter’s collection of birds and mammals of Colorado.  He sold it to establish the museum for $10,000.  Carter’s collection, along with a collection of butterflies and moths, and supplemented with a collection of crystallized gold was the basis of the museum.  It was incorporated December, 6, 1900.  The museum was opened July, 1 1908.  In 1914 William C. Bradbury was offered the honorary position of Curator of Oology.  He held this position until 1925 when he passed.

For those not versed in Oology, it is the study or collecting of bird eggs.  This hobby is pretty much restricted as illegal by modern wildlife laws.  Denver’s museum has a collection of about 50,000.  The British Museum claims 610,000 and the Delaware Museum of Natural History counts 520,000 eggs.   Most collected before the 1950’s. 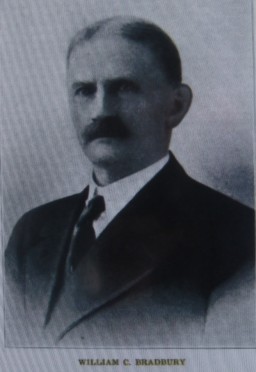 This entry was posted on October 29, 2019 by denverhistoryblog in Larimer Street.