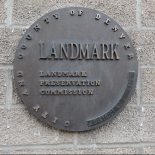 His career changed direction when he became the Director of the Equitable Life Assurance Society.  He secured the erection of the Boston Building and the Equitable Building in Denver.  He continued his business interests becoming the vice president of the First National Bank of Denver under David H. Moffat. The Colorado Fuel and Iron Company employed him as a vice president.

In 1879 Denver, was the 17th Bell telephone exchange in the country, competing against the Edison company.  Fredrick Ozni Vaille and Henry R. Wolcott were licensed by Bell Telephone of Boston to develop service in Colorado.  By 1881 the two formed the Colorado Telephone Company with connections to Central City, Cripple Creek, Black Hawk, Georgetown, Idaho Springs, Pueblo and Manitou.  In 1884 their connections measured 2000 miles of wire.

Wolcott secured Fort Logan as a military post.  He also organized the Denver Club and was president for many years.  He was a friend of Colorado College in Colorado Springs.  His interest in learning spawned the Wolcott Medal in public reading at East High School.

Henry also entered politics.  He was the State Senator from Gilpin county in 1878.  Not falling far from the tree, his brother, Edward O. Wolcott was the U. S. Senator from Colorado.  While Henry R. Wolcott was president pro tern of the General Assembly he served as acting governor when Lieutenant Governor Robinson died and Governor Pitkin was out of the state.  Henry R. was picked to head the Republican delegation at the 1888 convention in Chicago.  Later, he ran for governor in 1898 but lost.

Memberships and connection seemed to entice Wolcott.  He belonged to the Union League, University Club of New York, the Racquet and Tennis Club (New York?), The New York Yacht Club, Larchmont Yacht Club of New York, Atlantic Yacht club, the Tavern Club of Boston and the Metropolitan Club of Washington.  In Denver he belonged to the Denver Club and the University Club.  His private yacht was named the FORTUNA.

Henry R. Wolcott invested in real estate in Alma, Co. under the name: Mount Lincoln Improvement Co.  He was also president of the Utah and Pacific Rail Road.  And served in the Civil War.

Henry R. Wolcott appeared to do every thing in a big way.  He was born into a family of eleven children.  Some of them, like his brother, Edward, made it to Colorado.  His sister was also a wonderful addition to the new state.  Anne Wolcott Vaille was born in 1868.  She graduated Wellesley College and came to Colorado.  She was the principle of Wolfe Hall from 1892 to 1898.  In 1898 she founded the Wolcott School.  It was located at 13th and Marion, the buildings are still there, renovated into apartments.

The school was a boarding type school that also took in locals like Mamie Dowd, future first lady, Helen Brown, daughter of the Titanic survivor, and Clara Cody, Buffalo Bill’s granddaughter.  In 1912 Anne married her brother’s business partner, Fredrick O. Vaille.  She then turned over running the school to Mary Kent Wallace, who ran it until 1922.  It closed in 1924.  Anne’s daughter Agnes Wolcott Vaile was a mountain climber and died in 1925 descending Long’s Peak in a January attempt to scale the mountain.   There is an emergency hut dedicated to her on trail to the top of Long’s Peak.

Frederick Vaille retired from the phone business in 1903 and moved to a farm in Littleton.  That farm became the Pinehurst County Club, Vaille’s house is on the grounds as is Vaille Lake.  Vaille died in 1939. 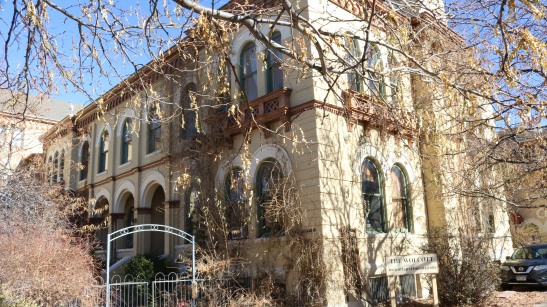 This entry was posted on November 19, 2018 by denverhistoryblog in Larimer Street.