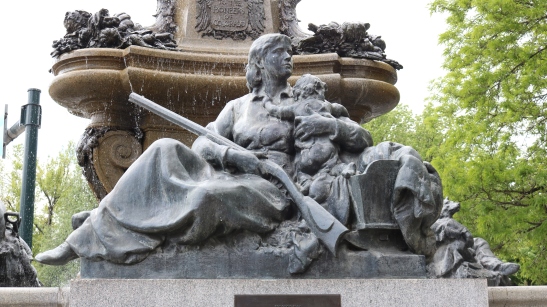 Subscribers to the Pioneer Monument Fund

On a plaque on the Pioneer Monument are the names of 37 private donors.  The State of Colorado and the County of Denver also contributed.  Many names are familiar to students of Colorado History.  Here is the list:

The monument was dedicated in 1911, 53 years after Denver was settled.  The stories of these donors is the story of Denver and Colorado.

Elizabeth M. Byers: 1834-1920, wife of the founder of the Rocky Mountain News, declined a window in the Capitol Building because being the wife of a famous pioneer was a not reason she wanted to be honored.  Was involved in Denver’s early charities.

Junius F. Brown: 1827-1908, another source list his death in 1912.  Brother of J.S. Brown of Brown Mercantile Company.  Mr. Brown was involved in banking, cattle, railroading, Denver Tramway and president of Riverside Cemetery.  He was an art collector that donated painting to the future Denver Art Museum.  His daughter, Jane Louise married noted architect, J.J. B. Benedict.

Horace W. Bennett: 1862-1941, Cripple Creek land owner that sold property to prospectors.  He was involved in real estate.  He bought the Brown Palace Hotel in 1922.  Main avenue in Cripple Creek named for him.

These are the first four names on the Pioneer Monument.  I found that the business dealings and personal relations intertwined in Colorado History.  Of course the common denominator was influence brought by fortunes from successful business endeavors.

This entry was posted on May 14, 2018 by denverhistoryblog in Larimer Street.