The Gallup-Stanbury building was built in 1873.  The town was just 15 years old and progressed from log cabins to this architecturally interesting building.

The architect for the building was Leonard Cutshaw (1843-1904).  Cutshaw was from the east and a Union Veteran.  He was discharged in 1861, went to California, then returned to the Civil War in 1864, discharged as a Captain.  He came to Denver by way of Chicago.  His first job was with William H. J. Nichols.  He was working with Nichols when they built the Gallup-Stanbury building.  Later, Cutshaw branched out on his own.  He was the architect for the Curtis Block in 1881.  The Curtis Block housed The Baur Confectionary company after 1891.  We now call it the Baur building. It is the building next to Sam’s #3.

One has to wonder if there was a downward spiral for A. M. Stanbury.

During its life, the Gallup-Stanbury Building housed a meat market, a food stuff-bazaar, the Antlers Hotel, a saddle shop, dentists and lawyer offices.  Its most famous resident was Western Artist, Charles Stobie.  Stobie (1845-1931) was scout, painter and portrait artist.  He returned to Chicago in 1875 and continued to draw from his frontier experiences to continue his Western Art.

The ornamental spirals on the Gallup-Stanbury Building. 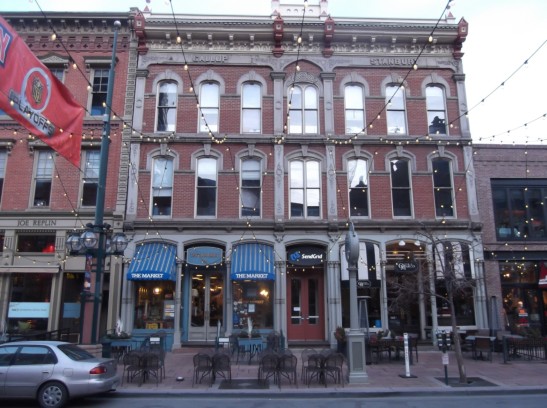 The Market housed in the Gallup-Stanbury building.  One of Larimer Square’s success stories.  Mark Greenburg and his late brother, Gary, were able to make it work after Dana Crawford found it wasn’t producing the business she hoped it would be.

Any comments, additions or corrections are welcomed.

This entry was posted on March 12, 2018 by denverhistoryblog in Larimer Street.