When hosting tours it is difficult to show something that no longer exists.  Denver’s City Hall is such a place.  Rick Steves,  the Public Television travel host, calls such a location, a “non-site”.  When he talks of Europe’s biggest non-site, he refers to the Bastille in Paris, the famous place the French Revolution began.  It, like Denver’s City Hall, was torn down long ago.  The Bastille, known the world over, no longer exists.  You can only show the ground where it once stood.

On the map you can see the small slice of real estate City Hall occupied.  City Hall was built in 1883.  So it was built in the same time period of the buildings on Larimer Street.  Horace Tabor already moved uptown to 16th and Larimer, building the Tabor Block in 1880.

“The contest over the location and the kind of building which was to be the new city hall was one of the most memorable of the early days.  Some wanted it on the present site of the post office, other wanted on the site of the East Denver High school.  The court house location was boomed by some influential people, but they could not compete with the workers from the West side, who had their hearts set on putting the building just where it is standing,  The strongest argument used by those opposed to the present location was its proximity to the creek and the history of the disaster of an earlier date when the entire structure was washed away.

The fight in the council waged warm and it now acknowledged that a large amount of money was distributed before the location on the creek was decided upon.”

The building took 15 months to construct, was designed by W. K. Nichols, and cost about $300,000.  The original building was four floors with a bell tower and a copula.  On Novermber 30, 1901 it caught fire.  The fire burned the fourth floor.  It was rebuilt with a flat roof. 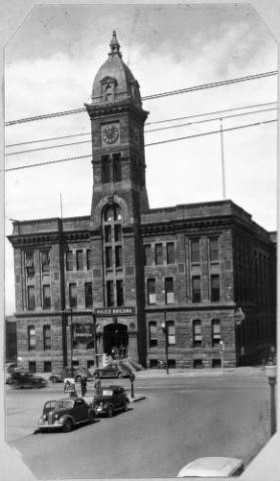 Even though City Hall is a “non-site” there is one thing left from the old building.  The city contract for razing the City Hall stipulated that the city would keep the keystone from the main doorway, the clock in the tower and 15,000 cubic feet of lava rock.  Luckily the bell from the tower was taken to the police garage and kept there until 1953.  A Rocky Mountain News reporter, Pasquale Marranzino, campaigned to have the bell enshrined at the corner of 14th and Larimer.  The bell was bolted onto a cement base.

The property were City Hall stood was transferred to Buzz Geller in a complicated land deal to acquire, ironically, property for the new city jail.  Old city jail stood behind City Hall on 14th Street.  In the 1901 fire, 29 prisoners had to be hand cuffed and taken away to be safe from the fire.  Good thing the land deal went through, the new jail holds about 1200 people.  The property where bell sits is owned by Buzz Geller’s Paradise Land Company.

The property is being considered for development.  It would contain a hotel, condominiums, retail space, 300 parking spaces and an improved bell park.

Additions, comments and corrections are welcomed,

The building lost its main tenant in 1932 when the city government moved into the new City & County Building.  In 1937 it was stripped of its fixtures.  The police moved out in 1941.  The fire department moved in 1949.  The last of the building was torn down in 1950.

This entry was posted on November 27, 2017 by denverhistoryblog in Larimer Street.