The tour on Larimer Street starts at the Kettle Arcade.  We then walk out to Larimer Street and proceed north-west looking at the buildings from across the street.  The Congdon Building is across from the Kettle Arcade and has the walkway under the building to the Larimer Square garage on Market Street.  What we see now is the second generation building.  The originals were built of wood, and were two separate buildings-Apollo Hall and El Dorado Hall. 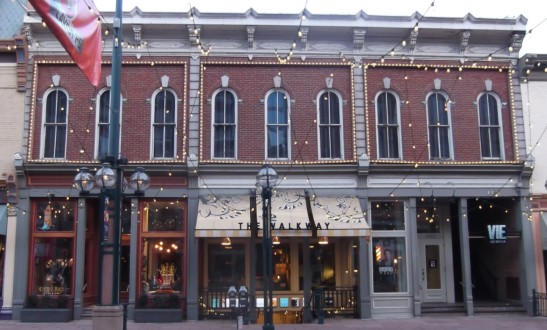 The El Dorado (or Eldorado) was a “finely finished frame building, occupied by Mrs. Jay. It was a “first class boarding house and restaurant.”  It then was a billiard saloon and eating house run by Mrs. Simms.  The lower house of the Legislature for the provisional government of Jefferson Territory held its sessions on the 2nd floor.  It was located at on the left of what is now the Congdon building, the address is 1421-23 on the new numbering system or 341 on the old system.

Next door was Apollo Hall, erected by Barney Bros. & Co.  It was first constructed as a billiard and liquor saloon, two months later it was converted to a hotel.  It would house the first “conveniently arranged” hotel in the City of Denver.  In October of 1859 it was a theater.  It had other uses as well.

The descriptions of Apollo Hall and Eldorado Hall seem quit similar.  In Smiley’s history he describes Apollo Hall as a drinking and gambling establishment with a theatrical department on the second floor.  He reports it is the “boisterous center of attraction in town.”  He writes about the interaction between the first and second floor: “Not infrequently some of the most pathetic passages and scenes on the stage were provokingly interrupted by the clinking of glasses, rattling of billiard balls, and boozy attempts at vocal melodies from the uproarious regions below.”

Pictured above is Apollo Hall, it is the gabled building with the upper porch.  On the left would be El Dorado Hall.  At the time this picture was taken it was Chamberlain’s Ambrotype & Photographic Galley.  The gallery was established August 19, 1862.  That would give the building time to be many things between 1859 and 1862, including the El Dorado.  The lower floor was Florman’s Ice Cream Saloon when Chamberlain moved to the second floor.  Chamberlain moved to Larimer and F street in November 1864.

The opening ball of the Apollo Hall was held September 15, 1859.  The Provisional Government of Jefferson Territory met in the large upstairs room of the Apollo Hall in September and October of 1859.  In 1859 Colonel Charles R. Thorne made arrangements with Apollo Hall owner Libeus Barney and set up a temporary stage.  Thorne’s company stayed just a couple of weeks, questioning the audience’s refinement.  It was said that when Barney wanted a new beaver hat he swept the floor of the ticket office, recovering $13.56 in gold dust, the usual form of payment.  The next act at the Apollo was Mike J. Dougherty who did plays and singing.  The Apollo went on the be the theatre of the John S. Langrishe troupe who took over the place in September, 1860.  It was Langrishe who replace the miner’s candles for oil lamps, upgrading the lighting.  The Apollo saw other uses.  On June 12, 1860 W.M. Slaughter, acting as chief judge, used Apollo as a courtroom, presiding over a trial of Marcus Gredler, in a dispute, he cut off the head off of Jacob Roeder.

The El Dorado and Apollo Hall were replaced in the early 1870’s with the present building.  The building housed numerous business.  One of its longer tenants was Schaefer’s Awning and Tent.  Photos of the building in the 1960’s shows it as a lighting store, a furniture store and American Brokers and Surplus Company.  When Larimer Square was built, 1427 Larimer changed names again.

One of the early investors in Larimer Square is Tom E. Congdon.  Like Dana Crawford’s husband, John, he was an oil man.  Heading St. Mary Land & Exploration Company Tom Congdon had the resources to invest with his personal friends, the Crawfords.  He was one of the original investors in Larimer Square.  He also invested in the Café Promenade, one of Larimer Square’s early high end restaurants.  Dana named the building at 1427 Larimer for John Congdon.  His wife, Noël, has the building where the Capital Grill is located, named after her and Tom Noel, the Denver Historian.

John and Noël Congdon are connected to many art projects in Denver.  They are sponsors of the Museum of Contemporary Art.  They were also instrumental in bringing the DANCERS to the green belt in front of the Denver Center of Preforming Arts.  They were honored by the BIG SWEEP in front of the Denver Art Museum.  These art displays are their larger contributions to art in Denver, but you will see their name in so many places when it comes to donations and sponsorship of the arts.  Thank You, John and Noël.

One thing I want mention about Larimer Square is that when Dana Crawford envisioned it, she was thinking high-end retail, William-Sonoma, Laura Ashley, Ylang Ylang jewelry, Ann Taylor, Marimekko Fabrics and Talbots.  She was even hoping the May Company would open in the Granite Building.  Now, you must “amazon proof” your mall, high-end retail is not in vogue, but high-end chiefs are the rage. If you ordered a meal from Amazon, it would be cold by the time the drone delivered it.  The focus has changed from retail to restaurants.  What will be next, more comedy clubs? 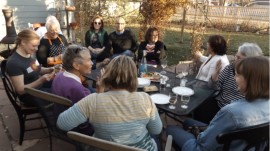 Additions, comments and corrections are welcomes.  I am looking for more sources on the El Dorado as present sources seem like they are describing Apollo Hall.  But, then again, try to describe the casinos in downtown Central City, they are all the same, one right next to another.

Sources; Dana Crawford, 50 years of Saving the Soul of a City, Mike McPhee